Point Pong ‘Portable Fun for Everyone’ Review and #Giveaway #GetMOONed

Now I can’t totally speak for other people my age or younger.  However, I personally feel like most every one whose ever gone to a party, tailgated, or even attended a college university, you’ve heard of beer pong.  You’ve probably played (no I’m not judging) or you’ve watched a game take place.  Being a big drinker myself and coming from big party school, I can easily admit I’ve played my fair share of beer pong…OK maybe even more than I’d like to admit. 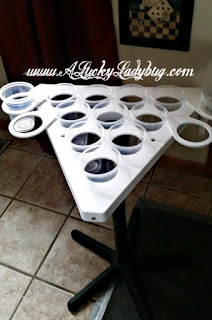 As an adult and a parent now, this has become a foreign activity and one that almost seems as a hush hush topic around children.  This just plain stinks because the game itself is actually quite fun.  So what if you could take the beer out of beer pong and play the same game you’ve enjoyed in the past without encouraging drinking alcohol in any way?  I know that get me excited and I knew my kids would be thrilled to play a game like this if Mommy would actually let them. 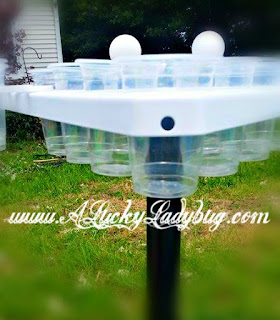 Point Pong has done exactly this.  Creator of Point Pong “envisioned a game, which could not only be considered a drinking game, but also a fun family game.”  It is your old version of beer pong with the flexibility of four tables and all accessories you could possibly need and now it’s Point Pong (making it family friendly).  This is by far one of the coolest game sets I’ve ever seen! 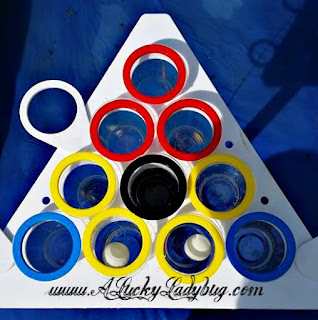 Your Point Pong set comes with a carry bag, 2 sturdy nylon bases, 2 strong plastic legs, 2 multi-functional tops, 8 side cup holders, 20 colored rings, 22 – 16 oz. cups, and 6 balls.  Can you just say wow?!  No more running to the store for cups or searching everywhere in your house for ping pong balls.  Not only does it all come with the set but it can be kept in one place when not in use, in the carry bag! 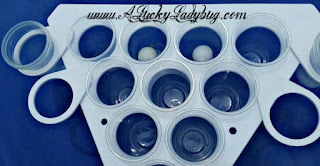 Not only are the tops waterproof, they also float.  This way you can play inside, outside, while tailgating, or while chillin in the pool.  I love the cup holders and the designated spots for holding the cups securely so I no longer have to worry about spills.  The kids can play this whenever they want without fear that it will encourage them to drink booze of any kind; We can play as a family which we of course did the minute it arrived; And for those adult only parties, I can still play my old version using beer. 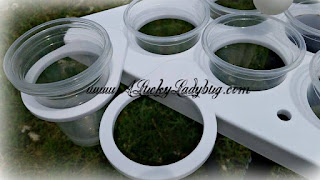 The best part is now whether I am playing the adult version or the family friendly one, I am playing on a pretty bad a$$ set.  We’ve used this now for several different occasions and in only the short month I’ve had it.  We took it camping a few weekends ago, at memorial day at my parents in the pool, tailgating at a sporting event this past week, inside our home whenever the kids feel like competing, and in our backyard anytime the weather cooperates.
Cost/Available to purchase:  $125 Point Pong Beer Pong Table Package
Recommendation:  The Point Pong set is very well made and sturdy enough it sure seems like it is going stand quite a bit of use over time and even with my rough family.  Built to travel wherever the fun takes you, the pieces can easily be thrown in the carrying bag and tossed in the back of your car.  This is definitely well worth the purchase if you are the type who will use something like this even if it’s only for the rare occasion your family or friends get together.  Cost wise, you really cannot go wrong with all the quality accessories that come with it too!
Point Pong Website
Facebook:  Point Pong
Twitter: @PointPong 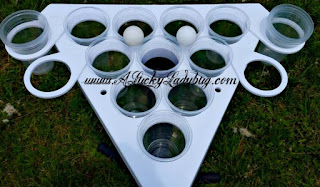 Giveaway:  Point Pong is going to give one of A Lucky Ladybug’s lucky readers a Point Pong Set to have of their own!
Swim, Sun, and Fun #3

Gamergal joined Point Pong and other fun toys this year at the Toy Fair. She toured the event and previewed some of this years new products. Point Pong made the cut!

Check out her reviews by clicking here.

This year, Point Pong was set up front and center next to the Music Stage at the AC Beer & Music Festival. This was the festival’s 8th year in a row celebrating the best brews and music in Atlantic City, NJ. This was Point Pong’s second year in a row being at the festival. Attendees are able to sample tons of food, booze, and fun games all day long.

Fans were able to come by the booth and play Beer Pong with friends and family at the event. Many people fell in love with the beer pong table and brought one home with them.

The beer pong table is versatile and it can float in water during those hot summer days, or it can be played on land. It then collapses into a portable bag that comes complete with balls, cups, and can even be adjusted to be 7 or 8 feet in length.

Missed out on all the fun this year? Check out the video! Be sure to come out next year!

Join Point Pong at the AC Beer & Music Festival this year. We will be stationed at booth’s 56 & 57. Come and meet our promo girls while enjoying a game of Beer Pong.

The Celebration of the Suds, better known as "The Atlantic City Beer Fest" returns to The Atlantic City Convention Center for the 8th year on April 5th & 6th. The 2013 event will be an amazing experience in taste and sound including amazing music to compliment savory brews. The 2013 Atlantic City, New Jersey is the destination to discover beer and music!

We will be located right near the music stage so indulge in some great music. Headlining entertainment includes The Bouncing Souls, Rusted Root, and Reverend Horton Heat. Discover some of the best brewed beers and eat some mouth watering foods. We hope to see you there!

Point Pong is a versatile beer pong table that can be used on land or in water. It’s recessed cup holders keep the cups in place keeping your home or apartment clean of spills. It can be set up to turn into a floating Beer Pong table which is perfect for lounging in the pool on a hot summer day. This 6 foot, 7 foot, or 8 foot beer pong table can be set up to suit any of your needs! Buy Point Pong now!

Join Point Pong at the Largest RV Show and enjoy Beer Pong and other fun activities!

The Golden Nugget hosted the World Pong Tour Championship this year. Point Pong was there to play some Beer Pong in the pool. Attendees played Beer Pong and competed for the grand prize of $20,000.

Point Pong is thrilled to be a part of the International Pool | Spa | Patio Expo!  Come join us in some Beer Pong fun & learn about other cool outdoor products! Join us November 6-8, 2012 at the Morial Convention Center in New Orleans, Louisiana!

Make your patio the most awesome patio ever with Point Pong – not only can it be played on land but even in your pool! Best Beer Pong Table Ever? We like to think so.

Kevin Brown, the creator of Point Pong will be interviewed by Michael King the “Cajun Contractor.” Brown will be discussing the wonderful world of Beer Pong and how Point Pong became what it is today.

Point Pong will be joining Adam Goldstein on his Book Tour this NFL season! We’ll be touring at a football stadium near you! Be sure to check out Adam’s book “Tailgate to Heaven.”

He sold his flat and left his job and his girlfriend in London for American football. His goal was to achieve what no other American football fan has accomplished: attend one live National Football League (NFL) game, including those in London and Canada, at every NFL stadium during the regular season.

Adam traveled over 65,000 miles to watch 40 American football games in 18 weeks to experience and understand the phenomenal appeal of that classic American pastime, the tailgate party.

Come join Adam and Point Pong for the tailgating experience of your life! Play some Beer Pong and learn about other cool tailgating products. Stay tuned for more information.

Point Pong had a booth set up to kick off the summer party early! Thanks for having us! The day was spent listening to great music, beer, beer pong, and more! Check out there site, we hope to see you next year!